The Main Duties of a Cutout

Posted at h in Cutouts by 0 Comments

The Three Important Duties of a Fused Cutout 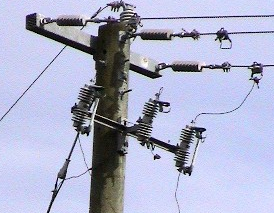 If you look up at the electrical distribution lines overhead, you are likely to see a fused cutout.  That little device has been modified and improved over the last 80 years to become the product electric utilities all around the world use today.   This product has become widely used because the fused cutout has three main jobs which this article will explain.

Duty 1:  Fused protection for a line asset (often a transformer)

The cutout will also operate and open the circuit in the case of a downstream ground fault. For example, if a tree falls on a power line, this would cause a ground fault. All the available energy will try to rush to the ground.  This is dangerous and the circuit must quickly be opened. The current that will try to rush through the cutout and to ground can be more than 10,000amps. The cutout stops the flow of energy by quickly extinguishing an arc which is generated inside the fuse holder.  After the arc is extinguished the fuse holder will fall open.  Again, the open fuse holder provides a visual indication that the fuse had operated and must be replaced.

Regardless of the cause if the fuse cutout operates the fuse holder will hang open signaling to the linemen that the line must be serviced.   This seemingly simple duty is one of the most important jobs of the cutout.

As you can see the fused cutouts found overhead preform valuable duties all of us.  These little devices save electric utilities millions of dollars a year by preventing damage to transformers and other line assets. Also the cutout saves utilities thousands of hours a year by making it easy to see where a line needs to be serviced.  This also means in the case of a power outage electricity can be restored more quickly. The humble fused cutout keeps the light on and saves us all money.